The Jalapeño is one of the best known peppers and is widely used in the catering industry given its excellent flavour. It is named after the city of Xalapa in Mexico, interestingly where they are no longer grown although they are still extensively grown throughout other regions in Mexico. In Mexico, Jalapenos are called Cuaresmenos. The standard Jalapeno produces 3" thick walled fruits which ripen from green to red. They are usually eaten in the green stage, fresh or pickled, but when allowed to ripen, jalapeños are amazingly sweet. Used extensively in Mexico on nachos, the rest of the world on Pizza's and the US in pepper eating contests! 2500-10000 Scoville units.


This is a standard Jalapeno pepper strain with some improvements to yield and a somewhat earlier crop. These bullet shaped peppers are produced in large numbers on a very vigorous 24 to 26 inch plant. The pods are approximately 3 1/2 inches long by 1 1/2 inches wide and begin there life as a very dark forest green colour, before maturing to a brilliant scarlet red in 65 to 75 days. The may be harvested when green or red and are used extensively in Mexican cooking either dried or fresh. 4000 to 6000 scoville units.


A hybridised jumbo fruiting Jalapeno variety named after the state of Ixtapa in Mexico where these chiles are grown. This vigourous plant produces good yields of large chiles which mature from dark green to red. They have good disease resistance, particularly to bacterial spot races 1,2 and 3 and have a scoville range or 4000-6000 units.


Jalapeno M (also called Jalapeno Jumbo or Jalapeno Santiago) is the most popular chile variety grown in Mexico and is widely used in Tex-Mex cooking, as well as for pckling purposes. These dark green chiles mature to a fiery scarlet red color and grow up to 3 inches in length with a typical Jalapeno shape, but is slightly larger than the standard Jalapeno. Approximately 3500 to 6000 scoville units. Very similar (if not the same as) Jalapeno Grande. 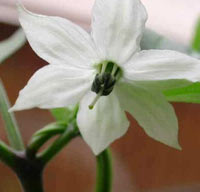 
The Purple Jalapeno is a beautiful, ornamental version of the standard Jalapeno pepper. The plants are very productive with a single plant producing upto 50 pods which begin as a brilliant emerald green, then mature to a stunning dark purple and finally to a fabulous scarlet red! As the plants often have chiles on them of varying ages, all three colors are often seen on a single plant which produces a most wonderful and most beautiful color effect! Though Purple Jalapenos may be beautiful, don't let their brilliant colours fool you as this variety rates at a respecatable 6000 scoville heat units which is twice as hot as a standard Jalapeno. 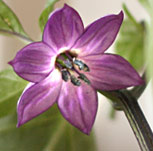