Healthy seeds are dormant living things. To get the most from your seeds it is helpful to understand a little about their needs. This chileman's guide focuses on all aspects associated with starting chile seeds and in particular on four of the most basic variables that are required need to be in place to encourage seeds to break their dormancy: Seed Vitality / Moisture / Temperature / The Growing Medium

When should you start your seeds? 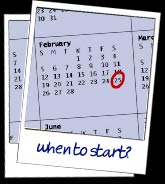 The answer to this question will depend upon whether you are planning to grow your plants indoors or outside. If growing indoors using artificial lighting, you can start seeds when ever you like. If you planning to eventually transfer your young plants outside, local climatic conditions, particularly temperature and natural light levels will dictate your start time. The chileman starts his seeds indoors 4 to 6 weeks before the last frost. Here in the UK, this is usually early February to mid March. Most varieties take at least 6 to 9 months to grow fully and set fruit. A February start usually means lots of lovely chiles from July through to October.

Seed Vitality
The health of your seedlings will be greatly influenced by the quality of the original seeds. Purchase seeds only from reputable suppliers such as the ones quoted in the Chileman database. The better suppliers treat their seeds with chemical to eliminate seed borne diseases. If you are using seeds saved from previous growing seasons the timely extraction and correct storage of seeds will also greatly influence their vitality. See the chilemans guide on seed saving for further details. Saved seeds should be periodically tested to check their viability.

To improve your chances of growing healthy seedlings, before sowing, inspection of the seeds is recommended. You should discard any which are deformed, cracked or discoloured. Dark spot's on seeds can be a sign of disease.

Germination testing
Germination testing is a useful method of checking the viability of otherwise of newly purchased or save seeds. Before undertaking a germination test, try to find out a little more on the germination requirements & times of the varieties being grown, particularly for varieties you have little experience with. Some of the chinense & wild species for example are notorious amongst chile growers for their poor germination rates and long germination times. Patience is also a virtue as some varieties such as 'Habanero' and 'Tepin' can take up to 6 weeks to germinate. 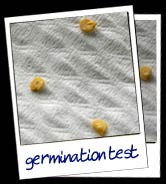 To start a germination test, lay out several seeds on a piece of damp kitchen or tissue paper in a regular grid pattern (to aid counting). The more seeds you use, the better the accuracy of the test. Cover the seeds with another sheet of paper, and carefully fold it up and place inside something that will retain the moisture such as a clear plastic self-seal freezer bag. Store the bag at a constant temperature somewhere warm, an airing cupboard or on a heat mat are good places to try. After 5-10 days, count and remove the sprouting seeds. Return the seeds to their warm spot and work out the germination rate (the percentage of seeds that germinate out of the total tested). If after another few weeks no more seeds have sprouted, you can be fairly certain that all the viable seeds tested that should germinate have germinated.

Bear in mind that a good germination rate does not mean you will get lots of healthy and vigorous plants, which may sprout readily on a warm tissue but find it hard to grow onto maturity. Young seedlings with a low life force are more prone to mutation and disease. To ensure you grow at least one prize specimen of each variety, you should plant at least half a dozen seeds. Note that once seeds have sprouted they will need lots of light to grow. If you continue to deprive them of good light (whether artificial or natural) you will have lots of long spindly plants on your hands. Most seeds provided by commercial seed suppliers should give a germination rate above 80%. Spare seeds from packets where the germination rate is below 50% should be retested and reported to the seed supplier if poor germination rates persist.

Improving Germination
Chile growers & Seed companies use various techniques in an attempt to increase germination rates. Amongst the most common are Physical Scarification & Chemical Pre soaking: 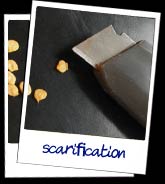 With Physical Scarification, the idea is to either remove part of; or thin the outer seed casing to aid germination. This can be done either with a sharp knife or a piece of abrasive sandpaper.

With Chemical scarification (pre soaking) the idea is to either soften the seed casing or mimic the chemical process of a bird's digestive system - nature's way of encouraging seed germination. It is an area of much myth and folklore amongst chile growers and involves soaking seeds in a range of chemical substances ranging from exotic hormone solutions such as gibberellic acid (GA3) to ordinary tap water, weak tea and even pigeon droppings.

The chileman has found that simply soaking seeds in ordinary tap water overnight to soften the outer seed case is just as effective as any fancy chemical treatments for most varieties. Rinsing them in Vinegar will also help reduce problems associated with seed borne diseases. The chileman has also had great success germinating seeds, particularly for some of the stubborn wild and Chinese species using the tea and the Pigeon methods even if the latter is rather smelly!

The Tea Bag Method:
It is the tannins in tea (which softens the seed casing) that is believed to be behind the success of this method. Any tea will do, but several growers have reported that Chamomile tea is particularly good as the teas anti fungal properties are said to reduce the problem of 'damping off'. 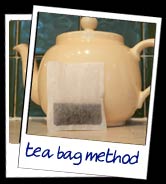 1. Remove the tea bag and drink the tea.
2. Make another cup of tea with the same tea bag and let it steep for a few more minutes. You now have your weak tea solution.
3. Place the seeds between two pieces of paper kitchen towel on a saucer and pour enough tea on the paper to soak up the water (drink the remaining tea).
4. Carefully fold the towel and place it in a warm place overnight.
5. After all that hard work, make yourself another well deserved cup of tea.

Moisture
During the germination process seeds take in water and begin to swell until the tiny seedlings emerges from the seed case and begin to make their own food by photosynthesis. Although moisture is essential to the germination process, the growing medium used should be damp not wet. Wet & waterlogged environments encourage damping off and mould formation and seeds are more likely to rot than germinate.

Soil Temperature
Chile plants, like their genetic cousins the tomato, are a warm season crop. This means that as well as a moist environment, chile seeds need sufficient warmth to break their dormancy. Dormancy is the seeds inbuilt survival mechanism which prevents seeds germinating in cold conditions which would subsequently kill the young seedlings.

However, even under optimum conditions the germination process can be slow and irregular as the degree of dormancy varies considerably between species.

The tropical origins of the wild and chinense species in particular tend to have the strongest dormancy, expressed by their slower germination times (often up to 6 weeks) and higher soil temperature requirements (75oF-90oF). On the other hand, seeds of the annuum species; which includes bell peppers and many of the ornamental varieties have a much weaker degree of dormancy and will germinate readily even at lower temperatures (50oF -75oF). 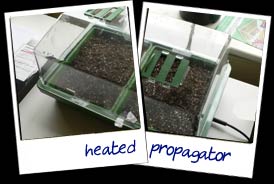 Whatever the species, as a general rule you should aim to keep the temperature between 75oF- 90oF (24oC-32oC) with the optimum believed to be around 85oF. Light is not critical to the germination process, but a heat source is. A seed propagator, an airing cupboard, on the top of the refrigerator or even an old electric blanket are good places to create good germintions conditions. 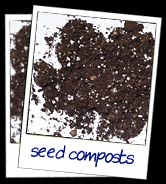 All Chile growers have their secret soil mixtures and who can blame them given the vast array of growing mediums to choose from. Peat and loam based compost, perlite (a form of volcanic ash); vermiculite (mica expanded with heat), rock wool cubes and hydroponic solutions are all commonly used. So what is the best? Well, it's probably easier to list all 3500 varieties listed in the chileman database than answer that question!

Many experienced growers swear by hydroponics (the growing of plants in chemical solutions rather than soil) and it does have many advantages. One of the draw backs is cost. Traditional soil based mediums are much more accessible to beginner growers so the chileman has decided to concentrate on this area. Chile peppers prefer to grow in light, well-drained soil where the pH level is around 6 (slightly acidic). The roots of young plants also need air as much as they need sufficient heat & moisture. The addition of perlite or vermiculite to sterile soil mixtures helps to stop compaction and improve soil aeration. When starting seeds, you should also avoid soil mixtures that are rich in added salts, bone meal or other fertilisers as these can burn tender young roots. The chileman also believes in the protection of the environment and would recommend using peat free compost where possible. 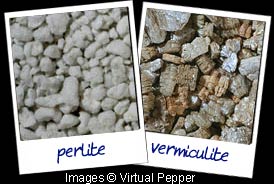 What ever secret mix you decide to use, a moist peat free seed compost, mixed with a sprinkling of vermiculite, perlite or sharp sand will ensure your seedling start their life off on a good footing.

The chilemans preferred soil mixture is:
Five parts peat free seed compost mixed with one part of Vermiculite and one part of Perlite

Use only 'fresh' seed compost when starting seeds. Do not use garden soil or previously opened compost that has spent half of its life stored in the shed. Both are likely to contain weeds, bugs and fungal pathogens which will kill off your little seedlings almost as soon as they've sprouted. After all, sterile soil mixtures are inexpensive and readily available at any garden centre. If you really insist on using garden or old soil, make sure the soil is weed free and sterilise it to eliminate potential soil-borne organisms. You can sterilise soil by pouring boiling water through it or baking it in a 180oF oven for 45 minutes. However, given the smell and hassle why bother! Seed trays should also be thoroughly cleaned with boiling water and a weak bleach solution before use as there's little point in using sterilised soil if your trays/pots are riddled with diseases. The chileman favours the use of multi cell seed trays as these make life a lot easier during the transplantation process. 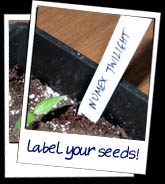 A common cause of failure is sowing seed too deeply. A seed has only enough food within itself for a limited period of growth and a tiny seed sown too deeply soon expends that energy and dies before it can reach the surface. A tip is to place the seeds on the soil surface and use an plant pot (with holes in the bottom) to gently sieve your soil mixture over the seeds, covering them to a depth of 2 to 3mm. Finally, whatever seeds you plant remember to label them. There's nothing worse than having to wait months and months before you can identify what you've grown. Especially when there are over 3,000 varieties to guess from. Mind you, you could use the chileman's database to help you. Once you've got your seedlings up and running, check out the chileman's guide to 'raising seedlings and transplanting' which will guide you through the next stage of the growing process.