Chile plants are fantastic. These glorious plants produce a fabulous range of chile peppers, which come in a multitude of shapes, sizes, colours, tastes, and heat levels. The chile peppers, if harvested correctly, are a source of viable seed. This seed can be saved, and stored, in order to produce 'free' plants from your favourite varieties for years to come. 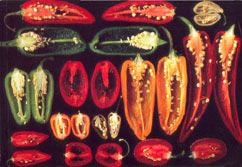 This chileman's guide attempts to provide guidance on how to identify the best pods for obtaining viable seed as well as highlighting some of the problems and pitfalls that can affect seed viability and quality.

Before I start, a word of warning. Capsaicin oil, which gives chile's their 'bite', is present in its highest concentrations within the placenta (the membrane of the pods, which hold the seeds in place). Once you get this capsaicin oil on your skin, or in your eyes, it is extremely difficult to remove it. Washing with soap and water tends to spread the oils around and can make the problem worse - especially around the eyes. Trace amounts of the capsaicin oil on the hands, from handling chiles, tends to spread to other parts of your body. Believe me, it will hurt if accidentily rub your eyes (or worse Gentlemen - go to the toilet), with even the smallest trace of capsaicin oil on your fingers!!!

Bearing this in mind, when handling chiles, you might find it helpful to wear a pair of disposable gloves and eye protection. Accidents happen however, and if the worst should happen, try to keep the affected area cool and avoid rubbing it. You could also try applying milk or yogurt (this contains an ingredient, which will slowly counteract the capsaicin oil). Remember that, even though the experience might be intensely painfully, the capsaicin oil does no actual damage to your body. From experience I have found that, after time the oil wears off and loses its effect.

To ensure the best chances of obtaining viable seed, you must ensure that the pods selected have fully ripened, before harvesting the seed. It may take several months for a pod to mature. 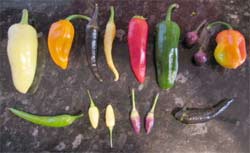 The pod 'sets' to a final colour as it reaches full maturity, and this is the best time to harvest for viable seeds. The final colour is generally red or yellow, but may also be brown, white, pink/orange, orange, or ivory. The pod may also change to other colours whilst maturing. An immature pod is unlikely to provide viable seed.

Thechileman's database is a good source of information for determining the 'mature' pod colour for your variety. Alternatively, it doesn't hurt to wait a few extra weeks and observe. Mature pods will be preserved on the the chile plant, unless damaged, for a period.

Healthy looking pods, whether misshapen or perfectly proportioned, are a source of viable seed. Cracked, discoloured, and insect damaged pods are more likely to become diseased/rotten and should be used as a last resort. However, if not diseased these pods are also a source of viable seed. The current understanding of genetics is that saving seed from an odd misshapen, or undersized, pod will not have any affect on future generations.

Avoid saving seeds from diseased plants, diseased pods, or pods which have softened with rot or are moldy. Some diseases/viruses can be passed down to the next generation in the seed.

A Word on Cross Pollination (Hybridisation)

A chile seed (like any other seed) is the mature ovule of a plant. It contains all the genetic material, and stored energy, to grow into a plant (potentially) displaying the same traits as its parent. However, hybridisation (cross-pollination between chile varieties), introduces new and different genetic material and the effects of this hybridisation can be seen in the next, and future, generations. Seeds identified, and sold, as 'F1' hybrids identify first generation hybrids. Avoid saving seeds from these plants since the only predictable characteristic of the second generation is that - you can't predict it!

The following chart identifies the general rule for outcome of cross pollination between the species of the domesticated chile: -

The most common Capsicum species, Annuum crosses prolifically with Chinense, sporadically with Baccatum and Frutescens but will not cross with Pubescens. Capsicum Pubescens will not generally cross with any other species, so in theory all seeds produced by a Pubescens species in a mixed garden will be 'true' and viable.

If you are planning to save seeds from a chile plant, and wish to it to have the same features as the parent, then you need to ensure: -

- That the donor plant is not itself a hybrid, - That the plant is isolated (specifically the flowers) to prevent wind-borne, or insect-borne, cross pollination.

This is especially important for commercial purposes, where you have the ability to offend all your customers! Not only does uncontrolled hybridization produce unpreditcable characteristics in future generations - it may also produce sterile hybrids, and/or non-viable seeds.

The proper drying of seeds is essential if you want your seeds to last and ensure future plants are healthy. Excess moisture retained in the seed encourages life and the seeds will either slowly lose nutrients and vigour until they die, or simply rot. Moisture also encourages mold, diseases and fungal infections which might be passed on to the next generation of plants if seeds are not dried sufficiently. Scientific literature on seed saving often quotes that seeds should be dehydrated (dried) until the moisture content is 8% or less. In practical terms, it the seeds are not brittle after drying, they are not dry enough!

Seeds can be either 'air dried' or dried using a dehydrator. Both methods have their advantages and drawbacks although from a practical point of view, the former is the easiest method for the amateur grower and is therefore the one described in most detail here. Further information on drying seeds using a dehydrator can be found here: www.fiery-foods.com/dave/drying.asp

The process of seed saving: - 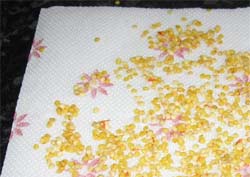 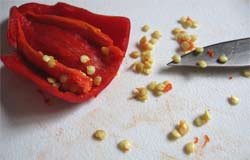 Carefully extract the seeds from the pod and place them on to a piece of kitchen towel. Towel dry the seeds to remove moisture and any debris still attached. Inspect the seeds and discard any which are damaged or discoloured at this stage. 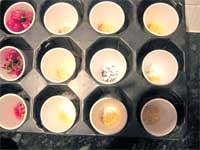 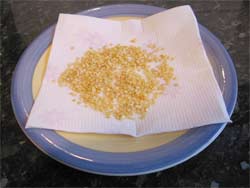 I like to dry my seeds in labelled polystyrene cups in the airing cupboard for a week or two. Alternatively you can dry seeds on a paper tray somewhere warm (and out of the direct sunlight) and where the kids can't knock them over. Turn the seeds every few days or so to ensure that the bottom layer of the seeds is exposed to the air. Good airflow is important to ensure the seeds dry evenly and prevent damping off.

After a week or so test the seeds for moisture content. As a general rule, if you can bend the seeds they are not dry enough. Dry seed should be fairly brittle and will not dent when you try and bite them. 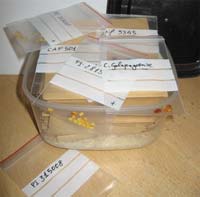 The key to the healthy storage of seeds is maintaining a constant temperature and eliminating excess moisture. Seeds stored correctly can maintain their vitality for many years although germination rates tend to fall as time passes. As most Chile seeds look similar, clear labelling is essential. As well as the name of the variety, it is good practice to detail the source of the seed, the date when the seeds were saved and germination success rates (if the batch of seed saved has been used before).

To maintain seed viability, they should be stored in a cool, dark, dry place preferably between 35-50oF. One preferred method is to store seeds in clearly labelled water tight plastic envelopes in a Tupperware container at the bottom of the fridge. The cool, dark conditions mimic nature as the metabolism of the seeds slows down. Again, ensure seeds are sufficiently dried before storing them in the freezer as excess water/moisture can rupture the cell walls and your seeds will die!

As an alternatively, seeds can be stored in airtight glass containers with an equal amount of a drying agent such as Silica Gel or Rice. Avoid storing seed containers in places, which catch the sun, are near radiators or in areas of high humidity.