Contrary to popular belief Chile pepper plants are perennials and can grow for many years if over wintered successfully. Indeed I know people who have specimens up to 8 years old although plants are most productive in their earlier years. Over wintered plants can give you a great head start for a new growing season, as mature plants will quickly produce flower sets and very early crops in year 2. Unfortunately over wintering your precious plants can prove to be a very fickle & frustrating affair. In this guide I aim to drawn on my experience growing 100's of varieties to highlight some of the common problems and provide a few ideas to improve your chances of success. 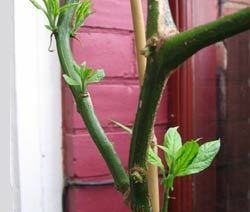 I've had many successes and failures with each of the different species of Capsicum (both cultivated & wild) and have tried all sorts of things from differing water regimes, drastic pruning and climatic support to improve plants chances of survival.

Successfully over wintered plants nearly always produce more pods in year 2. This is particularly true for some of the chinense species (like the Habaneros), which often have long growing seasons of 120 days + and don't get enough time to fruit in all their glory in year 1, particularly in temperate climates like the UK. The trick to over wintering is to control growth or manage dormancy.

Dormancy, the process when your plants effectively 'hibernate' can kick in when natural light levels fade and the temperature falls back below 50oF. Dormant plants will shed all leaves and so no signs of growth, however they are not dead. Dormant plants should be cut right back leaving only a small stump just a few inches above the soil line. Leaving dying vegetation encourages pests like whiteflies and also disease. Even after the most severe pruning, dormant plants will sprout new vigorous growth when the warmer spring weather returns, assuming of course they have made it through the winter.

Which plants over winter best? 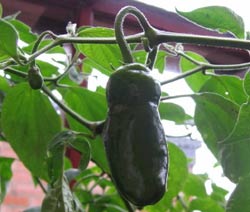 Of the five-domesticated/cultivated capsicum species (Annuum, Chinense, Pubescens, Frutescens & Annuum), Pubescens tend to over winter best in my experience. Their natural climate is the cool upper slopes of the Andes Mountains and they can quite happily tolerate the lower winter temperatures. No pepper plants will survive a hard penetrating frost though. Water molecules in the plants root system expand when they freeze causing permanent and fatal damage. Varieties such as Rocoto and Manzano normally over winter very well with little more damage than a little leaf drop. I tend to leave immature pods on the plant. Although growth is slow to non-existent, they tend to ripen when the hours of daylight lengthen & weather improves. Capsicum Eximium, a closely related wild relative of Pubescens and other wild species like Chacoense and Pratermissum also over winter well.

Capsicum Chinense, which includes the Habaneros, Nagas & Scotch Bonnets, demand warmer climatic conditions and a long growing season for fruits to fully develop and ripen. You would think that these would be the hardest to over winter. No so in my experience although they are probably the most unpredictable. A 2 year old Chocolate Habanero plant, which made it through 2 cold, winters perished in year 3 despite milder conditions. This year a three year old Red Savina plant bit the dust despite making in through two previous winters as a younger, weaker plant. Why did this happen? I believe a contributory factor was not removing mature pods from the plants. 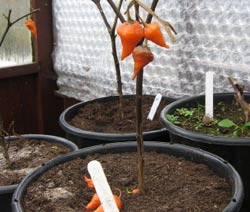 A Chile plant's mission in life is to set seed, not furnish your belly with tasty pods year after year. Once pods have ripened, seeds are viable and the plants job is done. If you keep picking off the pods, the plant will try to produce more assuming it has enough nutrients to do so hence the need for correct fertilising just prior to the fruiting stage.

In the case of my deceased Chocolate Habanero & Red Savina plants, in the year of death, I was lazy and left mature pods on the plants, whereas they had been harvested in previous years. In addition I removed all pods from my Naga Morich & Caronog (also of the Chinense species) plants prior to over wintering and both have survived. Although removing mature pods will not guarantee your plants survival, it does seem to improve plants chances of survival.

On a final note, plants of the chinense species do seem to suffer much more from leaf drop than the other species with nearly all my chinense plants now as bald as pool ball. Leaf drop is perfectly normal and is a plants natural way of conserving energy during the dormancy process. All discarded leaves should quickly be disposed of to avoid encouraging pests & diseases. 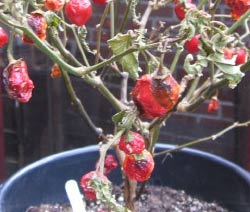 Frutescens are probably the closest relative (of the 5 domestic/cultivated species of capsicum) to Chinense and in my experience their survival rates are similar. Tabasco plants winter well if pods are harvested and they are pruned back sharply. Without pruning foliage, ultimately plants turn brown and often die back quickly, a scenario to which plants of the annuum species seem most susceptible.

In pepper naming convention Annuum means annuals, a misnomer, as all Chile pepper plants are perennials. Having said that, over wintering annum's is normally a bloodbath for me and I've rarely had success, particularly with some of the more compact ornamental varieties like Purple Prince, Prairie Fire, Bolivian Rainbow, etc. Maybe this is something to do with genetics and crossing to produce these highly ornamental varieties in the first place. Don't be too downhearted though as many of my friends who experience milder winter weather have faired much better. 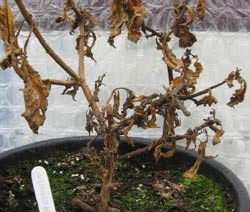 I've brought my annum's into the house, removed pods, reduced watering and pruned back some almost to the roots, but even if they do make it to year 2, they are nearly always poor specimens. Of course they are always exceptions and I have managed to over winter a glorious Numex Twilight plant over a number of seasons. Having said that, I didn't plant the seeds until June and the plant had barely started fruiting by the time the winter set in. May be it had just a little more pent up energy to drag itself through the dull & depressing winter whilst snugly sitting on my kitchen windowsill.

The good thing with Annum's though is that seeds tend to be more readily available and they grow quicker than the other species so it's no great loss if they die. 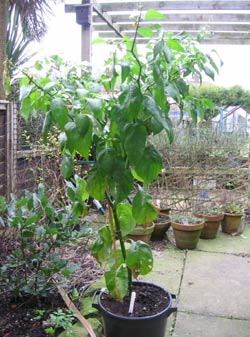 Finally, watering regimes also has an influence on over wintering success or failure. Chile plants hate getting there feet too wet, particularly when there is not enough climatic heat to drive the process of transpiration (the evaporation of water from both the plant's leaf and the soil). You should keep watering to a minimum; maybe as little as every other week rather than every other day although never let plants soil go completely bone dry.

Over wintering is a fickle affair but you can improve your chances of success by:
- Growing species that are more cold tolerate like Pubescens
- Improving climatic conditions by bring plants indoors
- Removing ripe pods before over wintering
- Cutting back woody stems and removing dead or diseased growth to keep pest & disease at bay
- Controlling water regimes

If your attempts at over wintering are littered with more failures than success all is not lost. Space is normally at a premium in the Chile grower's garden and if all your plants survived you would have less space to try new varieties the following year. If you really love a particular variety you can always grow them again from seed from the parent plant. Even if the seeds are not true (they have crossed with another variety), you could have a very interesting 'new variety' on your hands.

One of the questions we hear most often is, which is the hottest pepper? There are more than a few possible contenders. Read the evolving history of the hunt for the world's hottest pepper.
read more